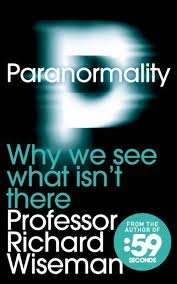 It’s been a week in which, between lurking various forums watching several pitched battles between mystery entertainers and men with sponge bunnies, I’ve been reading Richard Wiseman’s new pop-psychology book Paranormality.  It was an interesting journey.

Fresh from the general grumpiness I felt after reading Sleights of Mind (see previous blog post), I didn’t hold out much hope for Paranormality.  Wiseman’s stance of the ‘sceptical magician’ had me worried, were we going to get an exposure fest in the glorious name of science?

Not quite, which is a good thing.

Wiseman does go into some stuff, but it’s not problematic and is dealt with in such a fluffy, pop psyche way there’s little to be annoyed about.  In fact, if you know where to look there’s some creative mileage in the waiting to be exploited by the mystery entertainer.  I’ve been left with a few ideas, something I didn’t expect from a book like this.  And to be honest it’s a fun read.