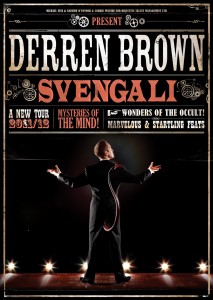 How do you talk about a show when you’ve promised not to tell?

I went to see it in Bradford yesterday, and my verdict is simply that fans of the impish Mr Brown will love the show as it ticks all the boxes that you’d expect to be ticked.

I found myself doing a lot of audience watching during the show and it was wonderfully apparent that the mind monger had them in the palm of his hand.

The show does feel that it has a lighter touch than previous shows, maybe because Andy Nyman’s not involved?  But saying that there’s always a darker second half…  There’s even a bit of ‘bizarre’ in it as well…

I’m deliberately switching off my thinking-too-much-magician-brain for this one, but with my thinking-too-much-drama-academic-brain remains on and I do feel that there are some minor problems with the dramaturgy of the show … but who am I to criticise, I am a mere brass cog in the great steampunk machine …

There I said nothing.