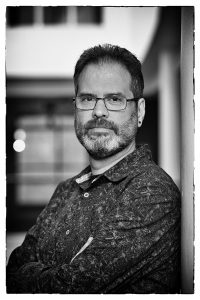 Dr Nik Taylor is Director of Teaching & Learning and a Senior Lecturer in Drama, Theatre & Performance in The School of Music, Humanities, and Media at the University of Huddersfield.  He researches and lectures on Performance Magic, Trans-Media Performance, Agency & Gaming,  and Creative Technical Theatre. He is co-editor of The Journal of Performance Magic.

Before joining academia, Nik had worked as a performer, writer and director; working on a number of projects in the UK, Germany and France, including Discurs’96 & The Festival of Contemporary European Plays. He has designed for Performance City, FestCEP & Sapajou, produced a low budget feature, and performed as a dancing penguin.

As a Research Magician, he is coordinator of the Magic Research Group and has just completed a research project entitled, ‘Performing Real Magic(K): The Conjurer and Audience in Bizarre Magick’.  He is currently working on a monograph on performance magic and theatre practice.  As a performer, Nik specialises in Bizarre Magick, Sideshow, Séance and Divination.  Nik co-curates Mr Punch’s Cabinet of Curiosities a dark museum of weird and haunted artefacts. He recently advised on the Thackray Medical Museum’s The Magic of Medicine exhibition and Proper Job Theatre’s Nosferatu and performed in Hester Reeve’s YMEDACA at the Yorkshire Sculpture Park.

He is a member of the International Brotherhood of Magicians and The British Society of Mystery Entertainers.