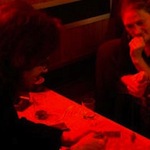 Bizarre magick is a form of performance magic that favours theatrical character, storytelling, overt allegory, symbolism and metaphor, and themes of the supernatural, fantastic, amazing and weird. Having roots in Victorian stage magic and the early 20th century performances of Theodore Annemann and Stewart James it realised itself as a movement in the 1970s through a counter-cultural reaction against the big boxes and card flourishes of a disenchanted contemporary mainstream stage magic.

Bizarre magicians sought to re-enchant performance magic with the mysterious and the spiritual, (re)discovering meaning through storytelling and theatrical character.

This paper examines the adoption of popular Gothic representations in the stage persona of a number of key figures in bizarre magic. Such representations may be overt – Charles Cameron’s Count Dracula Mentalism – or subtle – Eugene Burger and Max Maven referencing the characters of Boris Karloff and Ming the Merciless respectively. Gothic personae have been consciously explored by performers including Tony Sheils, Tony Raven, Bascom Jones and Tony Andruzzi and can be seen in the stage and TV shows of Marc Salem, Derren Brown, David Blaine and Criss Angel.

The performance of bizarre magick presents a complex series of meta-narratives within the form, often supplanting the literary in favour of popular Gothic (re)imaginings. These, often twice-removed, transformations/translations of classic and contemporary Gothic form and fiction are considered in the context of the bizarre performer’s engagement, through both performance and theoretical writing, with the fabulously monstrous.