I’ve had a fascinating time indulging in a close reading of Invocation/New Invocation magazine the seminal publication for Bizarre Magick. The Invocation edited by Anthony Raven (Bob Lynn) ran for 16 issues from July 1974 to April 1978. Then as the New Invocation for 61 issues edited by Masklyn Ye Mage (Tony Andruzzi) from October 1979 to February 1991. After which Docc Hilford took the helm for a further 22 issues.

I’ve only been able to examine the Raven and Mage years as the HIlford issues are yet to be republished (apparently Deceptions Unlimited are working on an edition), but the issues I have looked at tell of a remarkable time in magic(k) performance. A real movement away from the entertainment magic of the day, giving some original thinking on all aspects of bizarre performance. The publication shows us the development of this thinking, from the bizarre to the goetic to the ‘sound gothic revival’.

Max Maven states in his forward to Volume 2 that ‘[here] you will find a wide range of material….Most of it is crap.’ I rejoice in this crapness as many of the effects represent a vibrant period of experimentation on subjects then untouched by magicians. Issue 61 serves as a footnote to all that hard work with its series of essays that represent a state of the art photograph of the genre.

Invocation and New Invocation represent a history of delightfully subversive magickal thought, but shouldn’t be seen in isolation. The reader must return to the pages of Magick or the various books published by the regular columnists. Bizarre magick is a complex and exciting phenomenon that ‘gave back to magicians their identity’ (Minch). Elements of the bizarre are still with us today, and just as popular. 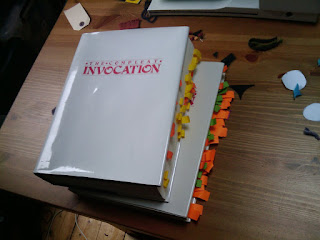 Lavater – The Shadow of History