The noted physiognomist Johann Caspar Lavater (1741-1801) returns for one night only to reclaim his place at the centre of European culture, armed with magic lantern, silhouette apparatus and a curious tale of photographic experimentation in his Zürich cellar. Lavater was a contradictory figure of the late Enlightenment – a churchman who believed in magic – and his influential Essays on Physiognomy created a fashion for silhouette portraiture that outlasted his arcane, deterministic theories, and establish him as a significant prototype photographer. This presentation includes lantern slides, audience involvement and live photographic experiment. 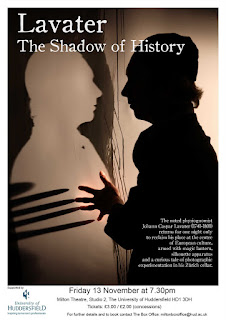 Simon Warner is a photographer, artist filmmaker and researcher into the history of photography and visual media. With a NESTA Fellowship he has created a series of impersonations of European cultural figures: Goethe, Daguerre, Lavater and Herschel. His Lavater presentation was included in the Arts Council England touring exhibition Alchemy . Recent projects include Victorian photography residencies at the Brontë Parsonage and Florence Nightingale Museums, and silhouette drawing installations for The Last Tuesday Society and The House of Fairy Tales. Simon is currently artist in residence on the No.36 bus between Leeds and Ripon, courtesy of Harewood House, PSL [Project Space Leeds] and Transdev Harrogate & District.