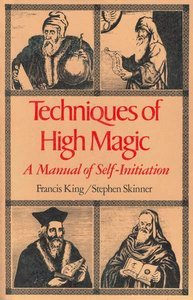 For the rest of this year my research time is going to be spent preparing for my upcoming sabbatical.  A sabbatical in which I intend to write, and write and, erm, write.  I might also start to awaken the blogger within and generally use these pages to examine some of the things I’ve been exploring.  This is likely to include the theory and the practical exploration of both Magic and Magick.

I approach this long period of study after some intense personal practice and a time revisiting places from my magickal past.  It was very interesting how that work now chimes with my current examination of the performative modes within magic.  More of the performance theory stuff to come in a later post by the way, but for now I just wanted to repeat a definition of magick that’s been with me for nearly 30 years.  I’ll not comment on it, just leave it with you.

When, however, the present-day occultist talks about magic he means something similar to, but by no means identical with, what an anthropologist is referring to when he writes of ‘the magic of primitive peoples’. For the purposes of this book, then, the word magic is primarily used in the same sense that it is defined by the overwhelming majority of contemporary magical practitioners ‘the art and science of using little known natural forces in order to achieve changes in consciousness and the physical environment’. “We also use the word magic in a secondary sense as meaning the entire body of doctrines and techniques concerning the conjuration, nature and power of angels, spirits, demons and other non-human entities; the manufacture and consecration of wands, swords, and other instruments used by magicians in the performance of their art; ritual divination by such methods as geomancy; the manufacture and consecration of talismans; and the exploration of universes other than that with which we are familiar.
There are many schools of magic in existence today, but many of them ultimately derive from the same source and almost all of them share the same four fundamental theoretical assumptions:

1. That the universe of the physical scientist is only a part, and by no means the most important part, of total reality.
2. That human will-power is a real force, capable of being trained and concentrated, and that the disciplined will is capable of changing its environment and producing supernormal effects.
3. That this will-power must be directed by the imagination.
4. That the universe is not a mixture of chance factors and influences but an ordered system of correspondences, and that the understanding of the pattern of correspondences enables the occultist to use them for his own purposes, good or ill.

from:- King, F. & Skinner, S. (2000) Techniques of High Magic: A Handbook of Divination, Alchemy, and the Evocation of Spirits. Reissue. Destiny Books.

Getting There
Edge of the Unknown (and more)